Bagyong Tisoy has made landfall in the Bicol region Monday night and is expected to slam the southern part of Luzon until Tuesday. 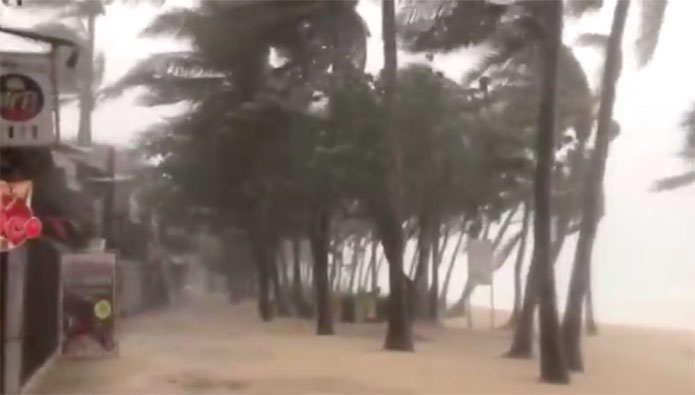 Bagyong Tisoy is packed with maximum sustained winds of 155 kph with gustiness of up to 235 kph. The storm is currently bringing violent winds and intense rainfall over Camarines Norte, Camarines Sur, Albay, and Masbate.

This eye wall is forecast to affect Southern Quezon, Romblon and Marinduque in the next 3 hours. Storm signal isa raised in big portion on Luzon and Visayas region.

Here are some of the photos and videos of Bagyong Tisoy as it hits the Philippines.

Naga was not directly hit, but the upper part of the eye wall skirted the city bringing in very strong gusts of wind with heavy rains captured in this night vision camera. No wind measuring device but its hard to stand if the gust of wind blows. #TyphoonTisoy #TisoyPH pic.twitter.com/mzvYv716YK

Going around Naga City as we await the full fury of #TyphoonTisoy. It has not made landfall yet but the howling winds and piercing rain is a preview of what to expect. W/ public transport halted, stranded residents had to be ferried to safety by Naga rescue personnel. pic.twitter.com/vEfz2ZgohP

Workers in a Boracay hotel put up last minute barriers for protection from strong winds, heavy rains due to #TisoyPH | @davidyusantos pic.twitter.com/iOV8GJrUyE

#TisoyPH has been bringing strong winds, heavy rain in Boracay since past midnight. Obviously, tourists are staying indoors. The island has also experienced intense flooding in the past | @davidyusantos pic.twitter.com/CazzpwP2P6

Roads are slightly cleared along Legazpi City to Daraga but jeepneys and other Public Transpo Vehicles are not available#TisoyPH #Tisoy #TyphoonTisoy
Photo from Jun Pajara of Legazpi City pic.twitter.com/lqKELZ4xKH

Here’s a look at Typhoon Tisoy’s wrath at 4am today in Atimonan, Quezon. Locals say this is the strongest typhoon that hit their town in five years. The number of evacuees here has ballooned to over 4,000. | via @jun_veneracion pic.twitter.com/ZywjB6HVRA