TNT Boys Keifer Sanchez, Mackie Empuerto, and Francis Concepcion impersonates Do Re Mi by singing “I Can” on Your Face Sounds Familiar Kids on Saturday, July 14, 2018.

“Your are really good. You can do anything and your friendship is so inspiring,” said Nyoy Volante.

“That was agreat performance,” said Sharon Cuneta. “You are really good. On point and you are so inspiring,” said Ogie Alcasid. 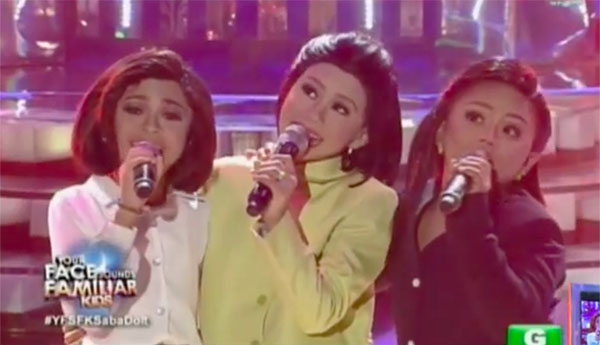 Do Re Mi is a Filipino musical movie starring Donna Cruz, Regine Velasquez, and Mikee Cojuangco. The song “I Can”, which is the main theme of the movie, became number one hit in the Philippines.

What can you say about TNT Boys’ performance tonight? Share your comments on the discussion box below.

Your Face Sounds Familiar is a singing and impersonation competition for celebrities and is based on the Spanish version of the same name. The show is hosted by Billy Crawford while Sharon Cuneta, Gary Valenciano and Ogie Alcasid serves as judges.