Thai Cave Rescue Begins – 4 boys from the trapped soccer team has been brought to safety on Sunday, July 8, 2018.

According to reports, four boys has been extracted from the cave successfully on Sunday. 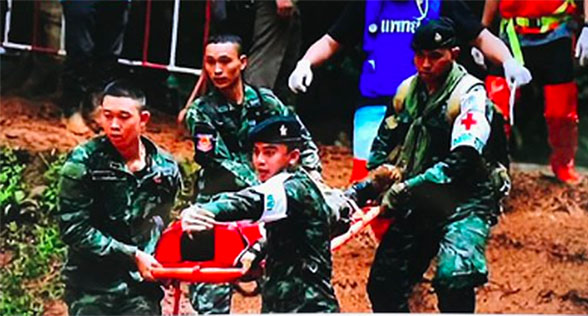 Eight boys and the coach remained inside the Tham Luang Nang Non cave as authorities paused the rescue mission to replenish air tanks along the treacherous exit route.

The rescued boys were taken to the nearby hospital in the town of Chiang Rai. The name of the boys were not released yet.

However, some reports identified the first boy rescued out of the cave as Mark,  real name Mongkol Boonpiam.

First image of a rescued boy from Thai cave…. being carried to ambulance ⁦@FoxNews⁩ pic.twitter.com/3tMW8E9DGV

I saw people tweeting about the reason why they took ‘Mark’ out of the cave first.
His name is ‘Mongkol Boonpiam’.
In Thai, Mongkol means ‘auspicious’ and Boonpiam means ‘full of merit’.
So, they took him out first for a good luck charm❤️ #Thaicaverescue #Thamluang pic.twitter.com/coz72MjJjW

The soccer team went missing on June 23 while exploring the six-mile-long Tham Luang Nang Non cave system, which is in a park in northern Thailand near the Myanmar border.

The boys range in age from 11 to 16, and are with their 25-year-old coach. They play for the Wild Boar soccer team.